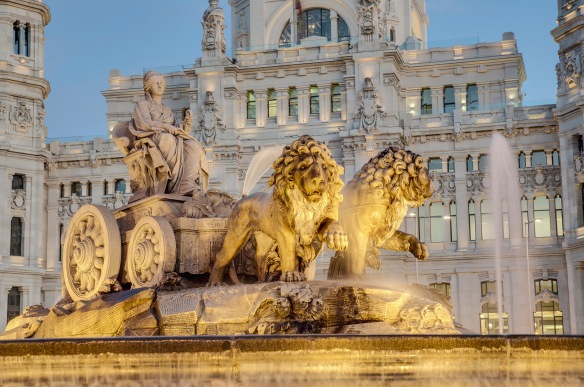 The Spanish capital is bound to be nothing more than some sort of buffer zone during our trip, nevertheless, we’ll do our best to make the most out of our short stay there. As mentioned on our previous post, we are departing Lisbon on an overnight train, that arrives at Madrid in the morning, beginning our short exploration of the place, which must come to an end in the evening, as we’ll be boarding a flight to Morocco. That leaves us with a few hours (almost half a day to be exact) at our disposal, meaning that we have to be very picky regarding our whereabouts, while at the same time we must take into account the toll fatigue will demand after our overnight trip from Portugal and the tiredness that will add up, as we’ll be strolling through the Castillian streets, lingering on the city’s attractions.

Our first view of Madrid will be Chamartin train station (Los domingos por la tarde,
caminando a Chamartín, las mocitas madrileñas, van alegres y risueñas porque hoy juega su Madrid, as the Madrid lyrics go) and we’ll use the metro (dark blue line) to get towards the direction of puerta del sur and get off  at Plaza d’ Espana (metro map). What lies near there are the ruins of Debod temple, an Egyptian temple that originally stood in Egypt, however the construction of the Aswan dam in the sixties, threatened the integrity of many archaeological treasures and the Spanish government offered great service to the Egyptians in helping rescuing the country’s legacy, so as a reward for their efforts the Spanish were given this temple, which was dismantled brick by brick and re-erected in the Spanish capital. We’ll make an attempt to visit, but it seems that the interior is off limits since the 27th of May, until further notice, while the whole place is shut on Mondays, so, if we visit, we’ll limit ourselves to outside views.

The next thing on our list is the Royal palace, , as the old gall is supposed to be of Greek origin (actually her family is Danish) (she should be though, as the Greek people were obliged to endow her with lots and lots of money in the 60’s, in order for her to marry the Spanish king Juan Carlos. We’ll probably avoid paying the 11 euro entry fee though, limiting our view of the 18th century building to outside views, before getting on with our stroll to the nearby Plaza Mayor, where we’ll spend some more time sightseeing until we move on to another famous Spanish plaza.

Puerta del Sol seems to be more interesting than Plaza Mayor, as you can find more  intriguing buildings around the place, such as the tower clock, where Spanish tradition seems to call for eating 12 grapes, when the year changes and the statue of the bear and the strawberry tree. Since both places are sure to be rather crowded locations, I guess we’ll have more sights to feast upon, as people can turn a place to a delightful experience or its opposite.

Continuing our walk, we’ll encounter Prado museum, which is the place we’ll most likely visit while in Madrid, provided we can maintain some decent level of stamina and mental vigor. The 15 euro fee seems fair, as this building houses one of the most esteemed museums in the world and will enable us to admire works of El Greco, Goya, Velázquez. There’s also a chance for free admission at 18.00, but we can’t make it on time for our flight if we do that, let alone we’ll probably be in a bad shape after roaming the streets for so long and that will prevent us from enjoying the place properly.

Not far from Prado lies Buon retiro park, a massive park where we are surely visiting in order to relax and spend some time appreciating this serene place. Finally, we ‘ll make use of the metro to get to Barajas airport, to get there, we’ll take the Red line towards Las Rosas, in order to reach Principe da Vergara station on the purple line (9) towards Paco de Lucia and we get off at Colombia station passing through some more stops (Pinar del Rey, Mar de Cristal, Campo de las Naciones), before reaching T1 terminal and begin our flight to Marrakech.

1 thought on “Dealing with our brief passing through Madrid (How do you spend time on a buffer zone?)”