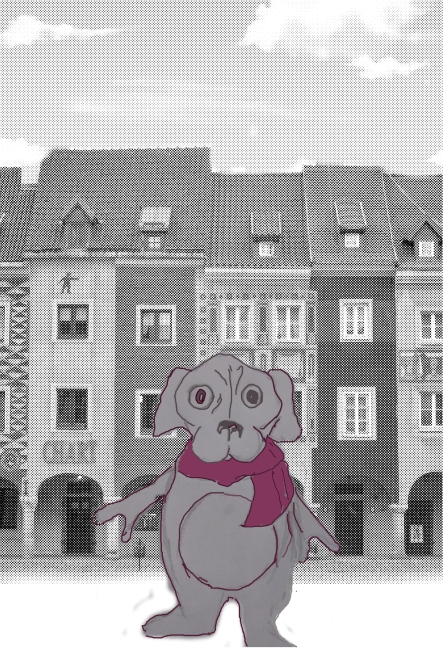 While traveling through Poland, I had the idea of drawing a comic strip about a puppy that goes around sites we visit having some sort of adventures related to the place. Hence, Yippee, the Unhappy Puppy was born but I was always sort on time to materialize this idea. Today, I’m making a first step towards this, since I think I postponed it long enough. This is a rough sketch and I used a shot of Poznan as a background. I made use of Manga studio, which I had used for a short time many years ago, so I am currently trying to learn some stuff about handling this software. Hope we’ll see more of this puppy…

The current post comes after the enthusiasm and hard work of a good friend, Kostas (whom we can probably call Encyclopedia Musica by the way, since this guy has both the skills and the knowledge of some good music). Kostas was kind enough to respond to our suggestion of compiling a list of songs that are related to travel (whether actual or mental) and the fruit of this effort took the form of a radio show, presented in the form of a podcast, on mixcloud. So, without further ado, enjoy this compilation which is an ideal soundtrack for a lengthy road-trip. All comments during the radio show are in Greek, but don’t let this be a problem since you can enjoy the music.

It’s 1991. Estonia gains independence from the USSR and is becoming a sovereign state for just the second time in the country’s modern history. The newly liberated state has just brought back from Paris to its bank a billion dollars (hidden by its last leaders before Soviet occupation). Some Russian mobsters think of a plan to steal the gold by shutting down Tallinn’s power supply while the unsuspected Estonians celebrate their independence. To reach their goal they enlist the help of Toivo, who works at the electricity plant as a technician but the young man is a bit reluctant towards aiding the mobsters. However, his pregnant wife Mary, urges him to take part in the heist “5000 $ can buys lots of baby food” is her convincing argument.  So, Toivo goes to the plant accompanied by the mobsters and leaves his wife home. Yet, some time after his departure, Toivo assists the mobsters unaware of the fact that his wife goes into labour and – to make matters worse, he succeeds in cutting of the power,unknowing that his new born baby needs an incubator. Furthermore his wife is told that Toivo is dead and that gets her worse. Finally the mobsters get caught but Toivo’s wife dies. As he gives her a final kiss, a teardrop falls from his eyes to Maria’s eyelids and she regains consciousness.

The film directed by Finnish Ilkka Järvi-Laturi is mostly shot in black and white. It’s a social tale which includes in the background a love story and some comic elements. The mobsters are a little bit like caricatures and occasionally they act foolishly in a boorish manner. The film presents the newly gained independence in an awkward view as the city of Tallinn seems poverty stricken but many inhabitants are happy for the potential success their liberty entails. Yet, some of them are still skeptical. We are in only ten minutes in the film and two anonymous passers by are wondering:

“So what do we do with this new freedom?”

“Same as we always did.” One of them replies, “Go to work in the morning”.

It seems that the transition to Democracy has not influenced the lives of average Joes and Janes (Joosus and Janes in this case). Indeed acquired liberty does not end the struggle for freedom rather enables the liberated to start a new struggle in order to manifest themselves even more by obtaining a higher level of being (but I digress getting too philosophical). Those passers by fear that so far, they have simply traded their Soviet masters for their Native ones and that’s a dim aspect of the future.

However, when Toivo turns the switch back on, the film turns to color and it’s like a light has fallen upon both in the story as in the country. The b & w scenes are part of the past and Estonians can march towards the future proud of their heritage and full of hope. The people shall overcome their adversities and work towards a better future. Any miracle is welcome though. As Toivo speaks to his presumed dead wife he proclaims:

“I heard a voice. Not God – if there is a God- but not Lenin, either.Just a voice. A beautiful voice. It said: “-You both will have your baby.”

A comedy, shot in the magnificent town of Giethorn, about a small Dutch village in the late 50’s. The villagers take pride in their brass band, but after a conflict the band splits up days before the regional band contest, due to the personal conflict between the two leading musicians. The local maestro is between crossfire by the opposing sides and he struggles to restore unity back to the band and the village, through a clever plan. Oh, did I mention there’s a Romeo and Juliette-sque love story?

This film’s humor is a bit outdated, but it’s a great film about the Netherlands. It captures the core of Dutch personality by posing the idea that although people may differ, the way to produce something good does not come through opposition and fight but through tolerance, concord and collaboration.

The fact that the film is a comedy, epitomizes the notion that things should not be taken too seriously, while the scenery is so amazing that human strife (if you can call that way, the hilarious misadventures of the opposing parties) seems out of place. Only the two lovers seem to be aware that there’s no point in fighting over trivial matters, therefore they seem to be the only ones in accordance with the background and although crazy in love, they are of the few sane persons in the village.

The film was shot a mere thirteen years after WW2, so I guess that part of the violence was still present in the people’s hearts. The conflict between the musicians is short of a war in a mini scale, but small conflicts can heat up, I mean come on! A small village split in two? Proportionally, that’s as insane as having the world split in half. I think that the scenery acts as a reminder of what truly matters. Beauty. That’s your world people. Enjoy it.