We got on the train to Bratislava sad to leave Hungary, yet eager to try and view the Slovak capital in the daylight. We accidentally sat on the first class at first, along with some more absent minded travelers but the ticket collector informed all of us that we had to move to our allocated seats.

While aboard the train I got a shot of Esztergom basilica…

Still, we had a great chance to enjoy the Hungarian countryside and in addition to that we were lucky enough to encounter a Hungarian girl, who was kind enough to inform us about various aspects of her fine country. We would gladly continue our conversation but she had to get off the train as it arrived on her stop. 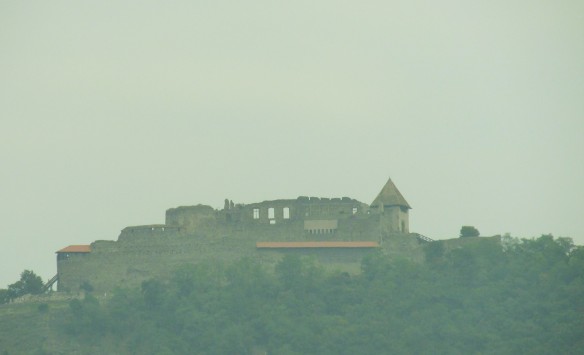 …and Vysegrad castle complex along the way

So, we reached Bratislava and caught the local bus and a tram to get downtown, carrying our baggage on the way. Luckily we travel lightly and there was no much of a problem walking around town with our stuff.

As we were walking we came across some sort of ceremony, but up to this day we do not know what that was about. It can’t have been a national holiday, but rather a smaller scale event.

Meamwhile, backstage the officials were getting ready for their part on the ceremony….

So, we hit the streets and reached the main square where most of the fun is to be found. But first things first. We were in need of a cup of coffee and we found ourselves a nice cozy cafe, where we spent some time relaxing. We returned to the place we had visited ten days ago relishing the opportunity to view it in daylight and confirm our suspicions that this is a beautiful part of the city. 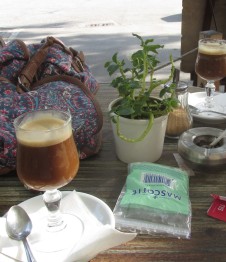 These rug dolls were enjoying a view of the city 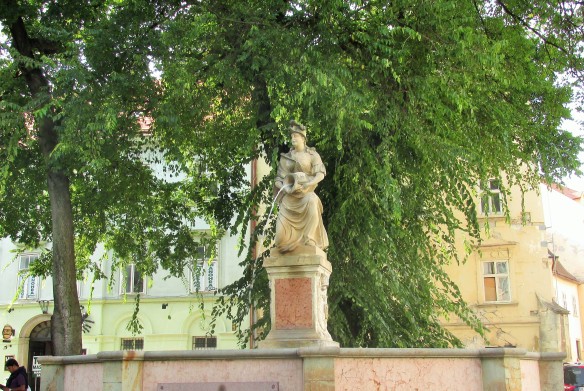 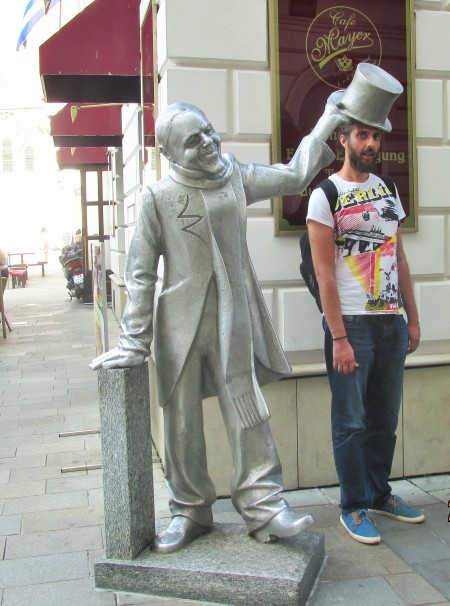 The Napoleon’s soldier statue we had encountered on the first night of our trip had company, among which stands the renown watcher, the man at work, a statue of a worker coming up from a hole in the ground watching the crowd. However, we were mostly interested in Schöner Náci, (real name Ignác Lamár), grandson of a famous clown, who found his life’s purpose on making other people happy. Thus, he used to walk around the old town of Bratislava, wearing a tall hat and a tailed coat, greeting the ladies with the words “I kiss your hand”, singing to them or giving flowers.

After walking around the old town for a while it was time to leave Bratislava and end our trip. We went to the airport and we were already getting eager to plan our next adventure. This was an entertaining journey and our only regret was not having more time to spent on these places and visit even more sights, but that’s always the case with travels. 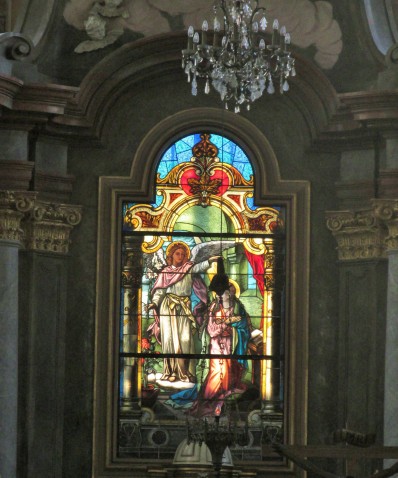 This journey was much fun, albeit a walking epic. Before venturing on this trip, we examined other travel options, among them next years trip to the Baltic and we thought of visiting a couple of places that we reluctantly had to forfeit. Among them was Kraków and places in Slovakia, Hungary and Austria. Our final listings for this trips itinerary were Bratislava, Prague, Český Krumlov, Vienna and Budapest. Slovakia was by far the place that we wronged the most since although we wished to visit Poprad and Bojnice castle, we settled for a brief visit to the Capital (a really short one since our flight landed late in the evening). We had a little bit more time at our disposal on the last day of the trip as we had to reach Bratislava for an afternoon flight, thus gained a chance to visit the city in the morning.

Our flight from Athens landed on Slovakia in the evening and we had a chance to view Hungary’s lake Balaton along the way (we had thought of paying a visit while in Hungary but we settled for an aerial view). Upon arrival we boarded a local bus and headed for the city, where we got on a tram to reach our Ibis hotel. We found many useful tips for our city transfers on this guy’s blog. 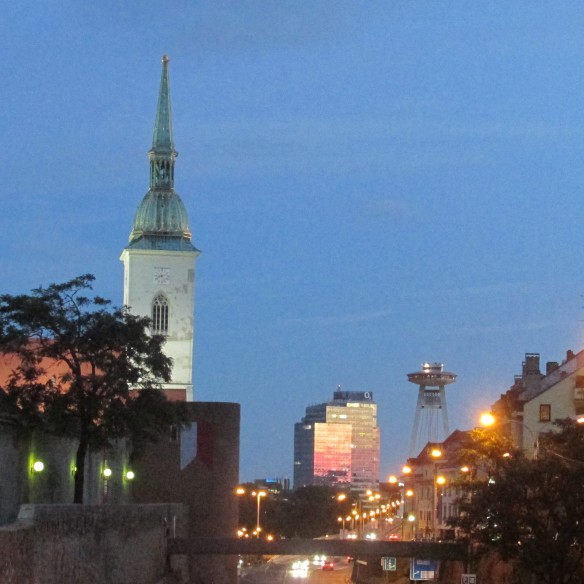 After freshening up and leaving our baggage at the hotel, we took to the streets to do some exploration. There are plenty of interesting sites in the city but we only had time a short walk and a bite. So, we marched towards the old town where most of the sights are located in search for some souvenirs, food and beer. The weather was a bit chilly as the sun had set but we were determined to make the most out of our short visit thus making Bratislava some justice for having actually left the city out of our plans. We bumped into napoleon’s soldier and we tried to find Schöne Náci and working man, yet though they were right in front of our eyes, we were too tired to notice, so we postponed our meeting with those two gentlemen for our return to the city ten days later. 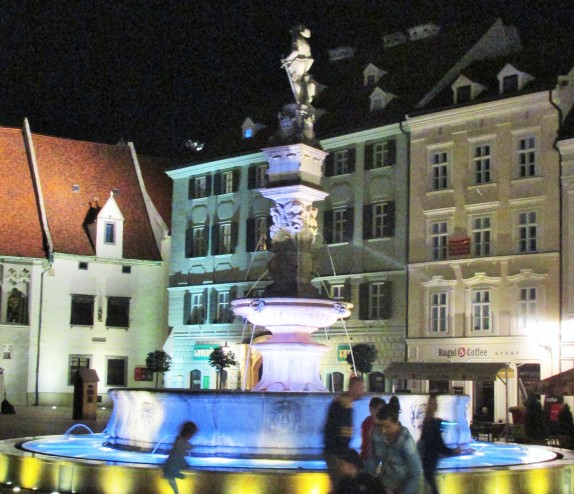 We met Maximilian II, the Hungarian king though guarding the city atop Roland’s fountain. The old city seemed that it would be a beautiful site by daylight and we confirmed that thought on our return to Bratislava. Most sites are found near the central plaza, among them the 17th century Jesuit church. 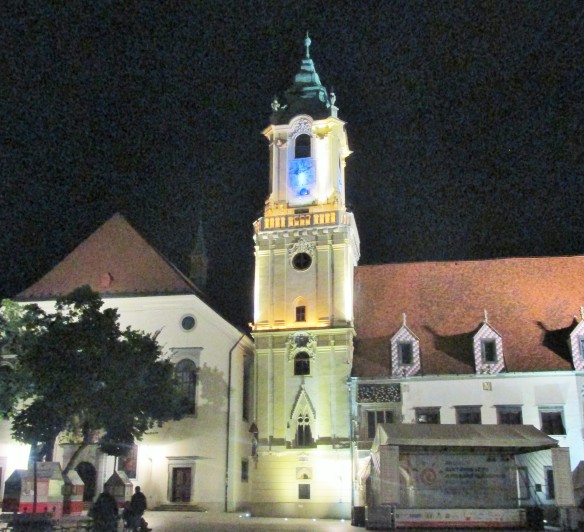 Since we were tired, we bought some souvenirs and had a chat with some locals who informed us about the beautiful sights of the country. That made our regrets – not having more time to spend in Slovakia, more intense though. Finally we decided it was time to have dinner and we found a pub where we had some hot dogs and beer. The alley seemed lively as many young people were hanging around the street’s bars and pubs enjoying the evening.

Food and drink gave us some extra strength and we decided to prolong our stroll around the city, in search for something to sweeten our taste. Eventually, we found a quiet busy shop and got ourselves a table. We enjoyed a lavender cheesecake which was extremely luscious and contributed to the amount of things that made us sorry to pay Bratislava such a short visit. 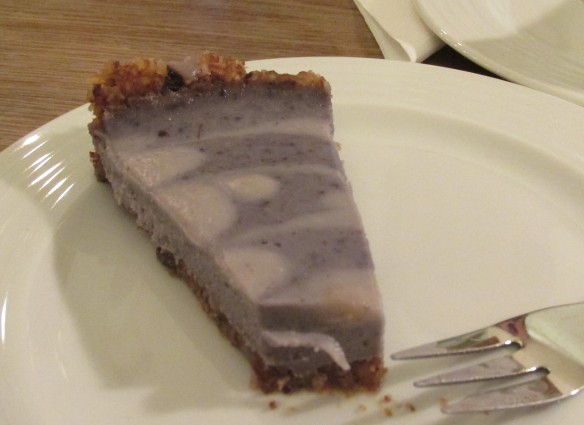 We also enjoyed night views of the castle which was gracefully lit overlooking the city from its hill. It seemed like an interesting place to visit.

Our tour of the town revealed a lively city with sights darkness could not hide completely – on the contrary the night shadows made the city pretty atmospheric. We guess most medieval cities are though, and the narrow streets, winding round the central square contribute their share to this aspect of the city. As we got tired from traveling though we returned to our hotel to rest thus bringing our evening exploration to an end.

In the morning we got up and walked all the way to the bus station to catch our Eurolines bus to Prague. We were excited that we were visiting Prague but we wished we could spend more time in Slovakia. A four hour ride was laid before us to enjoy the countryside between the two cities. 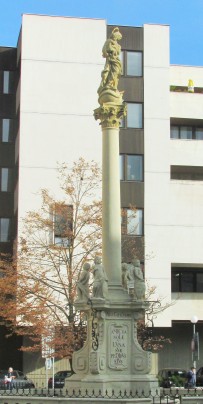 We also passed through Brno and I tried to perfect my way of making time go faster while on buses, trains etc. I am trying to find something of interest which usually is situated far in the distance and I zoom in to get a great shot. Needless to say that most efforts go to waste since the vehicle moves and there’s always a pretty small window of opportunity to take a good shot. There are some great chances when the bus enters a city or is stuck in traffic. Sometimes I also take pictures of Catherine sleeping beside me while I make funny faces (They are some weird selfies I ‘ll have to admit). However, this time I got a shot of the cathedral of st. Peter and Paul in Brno while on the bus. Still, that could not entertain us enough before reaching Florenc station in Prague, where our Central European trip was really kicking off…

View the next part of our journey here